A short history of the designer 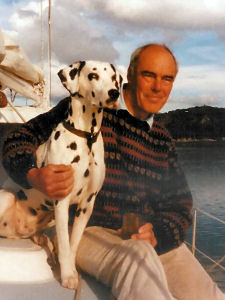 Ian Anderson was born in Shepton Mallett, Somerset and likely it was his fathers motor boat, kept in Poole Harbour, which kindled his interest in yachts and boats. He was apprenticed to Fred Parker in Poole for 3 years where they were designing some of the top racing yachts under the R.O.R.C. rules of the time. Fred Parker recommended that a spell at Camper and Nicholsons in Southampton might broaden his experience. After 3-4 years he got a job with George Hurley in Richmond Walk Plymouth building Silhouettes as yard manager. A job he didn’t really enjoy that much because for the first time commercial pressure was very apparent with production boat building – up till then it had been a very relaxed gentlemanly affair.

He then moved to work in Dartmouth at Philips and Sons the Shipbuilders, who asked if he’d like to design a replacement for the Silhouette – he jumped at the chance and designed the Felicity. The drawing board was a piece of plywood on top of his bed in his flat at the Boatel, Dartmouth. Around 300 were built.

In the following years George Hurley and Ian built a range of Hurley yachts going up the sizes, 20, 22, 24 and then the 30! Quite a large boat in those days. It is here where Ian become known for his critical eye on fairing and demanded the highest standard!

It was in the early to mid 70s that George rather ‘ lost the plot ‘ and produced some models including a motor sailor and a Swedish racing boat, which to Ian’s way of thinking at the time confused the image he had been trying to establish for a line of yachts.

Ian went on to design and build the SeaStream series  and became one of the UK’s most highly regarded designers. He had strong opinions especially on his designs, and a bit like Margaret Thatcher, when his mind was made up it was not for turning! This could be very frustrating for both the builders and the clients but gain respect in the long term and produced some very fine yachts as a result, putting build quality before profit.

Ian passed away 15th March 2013. He loved the countryside, the wind and sea, and he will be hugely missed by all those he touched.