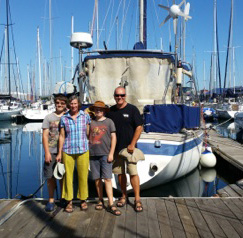 The cruising family on board Yindee Plus, a Seastream 43, have found SSB radio to be invaluable and certainly not an outdated form of communication, even with satellite phones and modems becoming more accessible. Here is what they have to say:

When we bought the boat, there was an old Furumo SSB radio already installed. We didn’t see a use for it in the Mediterranean so testing it out was on a list for the future. On our way out of the Med, we sailed in company with a group of boats we had met in Turkey. They were part of an SSB radio net. Although we didn’t listen in, we were amazed by the useful information they kept coming up with. Boats ahead of them would report back on any problems encountered, the best anchorages to use, their weather and a whole host of other things.

In Gibraltar we engaged a radio specialist to investigate our system to check it was all functioning. It should have been but it wasn’t and, by the time we reached the Canary Islands, we realised that a radical approach was called for. We fitted a brand new Icom (IC-718), a ham radio, so significantly cheaper than a marine model. We used the experts at …….in Las Palmas to fit it at anchor (the ARC were in the marina). One poor engineer suffered from extreme sea-sickness but battled against it, in the rolliest anchorage we’ve ever been in, to fit our system. He did a great job because our radio set since then has always been part of the stronger group of each ‘net’ we’ve been on.

We used the SSB radio for chat with the two family boats we crossed the Atlantic with and we took part in a daily net, which was a continuation of that Mediterranean one. Radio schedules (scheds: informal chat) and nets (more structured) can be established ones which run year after year, or can be set up ad hoc by a group of boats who have a need to communicate with each other: similar timing for ocean passages being the most common reason. That first net, “The Magellan Net” ran all the way through the Caribbean Islands, up the east coast of the USA and then to Panama. ‘Net controllers’ volunteered themselves for one day a week and guided the boats through the daily ritual: calls for emergency traffic; position reports from each boat and then boat to boat traffic. Our next net, The Southern Cross Net, was started when five of us left Panama to cross the Pacific. By the time we reached New Zealand we’d had 80 different boats call in over that six month period.

We absolutely love the SSB radio and wouldn’t be without it. It really comes into its own on a long ocean passage. The daily ‘news’ is listened to avidly and the sense of camaraderie is palpable. Information about weather and currents ahead of us is useful and, when things go wrong, advice and physical assistance are right there. When our friends broke their rudder only 500 miles into their Atlantic crossing, one of the very experienced net controllers was able to give them detailed advice about how to jury rig a steering system. They managed to get the boat all the way to St Lucia with it, meeting up with other net boats on route who dropped them extra fuel, water and even a christmas cake!

In the Pacific, several boats with rigging issues had the benefit of a rigger on the radio net to get advice from and sometimes we’re lucky enough to have an amateur weather ‘expert’ with us too (one of these predicted a late tropical storm in the South Pacific when we were all on passage from NZ: 26 boats were able to anchor at Beveridge Reef to wait until it had passed). Talking to another boat when you have problems on board is a great stress reliever. You might get some useful advice from someone else but talking about what’s happening for you is often all you need to cope with a situation. In the South Pacific, Chris spent every evening on the radio just chatting to a boat who had lost their lower stays 1000 miles from land. We’d changed course so that we could drop fuel to them if they needed it but the biggest difference we made was the daily communication. Friends in the Indian Ocean, who lost their entire rig, said that just having another yacht divert and keep them company for the rest of their passage gave them a huge morale boost.

We fitted a modem while we were in Panama and since then have used the SSB to download weather grib files and forecasts, and send / receive emails at sea. Access to Sailmail has been mostly good but there are some ‘holes’ in the system which don’t make it 100% reliable. We found in Northern Queensland, when we were a long way from Darawak, NSW that we couldn’t connect to the Brunei station. It wasn’t too important at that point as we were only making relatively short passages and could get internet weather before leaving (we use Passage Weather and Windyty). In the Indian Ocean though, it took ages to download gribs from Brunei, and then we couldn’t get them at all when we were near Rodrigues. We’d heard that the Africa station was almost unuseable as well. Ironically, the most difficult ocean passage of the circumnavigation, Mauritius to Richards Bay, SA, has no access to sailmail weather!. Many boats bought satphones specifically for this ocean but our budget didn’t permit that. We would have to rely on voice communications only and get our weather second-hand from those with the ability to receive it.

If we were setting out on our world cruise now, with full coffers, we’d have an SSB radio plus modem but would also buy a sat phone like Iridium Go for email and weather info as back up. Even today, when sat phones are common on boats, most cruisers will still have SSB radio on board too. We know two sat com boats who, after crossing the Pacific with small ‘receive-only’ HF radio sets, fitted full SSB radios once they got to Australia: it was too frustrating for them to listen in to all that useful chat and information but not be able to respond / add their own.