On the MkIII Seastream 43’s the mast and boom were heavily built from aluminium and used a Selden Rodkicker. These kickers then use a gas rod internally to push up boom. The same system is being used today with the same suppliers. Seldon make the actual Rodkicker contraption whilst the gas rod is supplier by a company called Aratron in German (part numbers below).

The actual unit is fairly basic and every 10 years it pays to renew the parts include the rivets, gas rod and plastic extrusions (see diagram).

The plastic parts are only £16 each so you might as well get them from Selden rather than renew or fabricate your own. The gas rod however is reasonably standard and since Aratron only sell them via distributors it ends up being £300 by the time it gets to you. SGS Engineering who do almost the identical product but in an adjustable format. Look up the product GSSV14-300 and you will find it is the same as the Aratron G28-300-2500N and set to 2500N force as standard. They are stainless and so should be suitable for a marine environment. I have always felt the 2500N in the original Aratron was a bit much so the beauty of the SGS version is that you can let is down a little to around 1500 – 2000N.

If you intend to drill out the old rivets and remove the end caps of the Rodkicker then remember to order new rivets from Selden. Don’t use stainless ones as they will react with the aluminium.

If you have an older Seastream without a rod kicker then I recommend to upgrade and if you have the rod kicker and never renewed it then maybe consider doing so.

Why replace the plastic extrusions?

If you’re rod is totally fine then I would advise buying some of the extrusions as spare. The design in not great, in that as the plastic fatigues it is possible for the gas rod to force itself through the end of the plastic extrusion which acts as a stopped inside the kicker itself.

As you can see from this photo it literally pushed itself out of the end causing the boom to just fall. Not great if you haven’t got a topping lift.

You can see from this photo that someone from Germany fit a hardwood block to the end of the arm instead of the Selden part to ensure it would never push through like it did on mine. 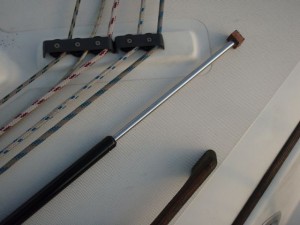 I would have personally shaped the wood to the same outline as the Selden part so that it fit snug into the kicker rod and didn’t allow the end of the gas rod to move about. You get the picture.

If you are an owner and would like your boat included on this site or simply require additional information then please do no hesitate to get in touch: